I'm going to avoid the ever looming fact that I haven't been on here since April .... and just gloat that my little baby is now a 1 YEAR OLD! (well 1 yr and 3 weeks)

First birthday was great. Although she was sick - had a cold and was generally unhappy. And then to add insult to injury, three days after her first birthday she went in for surgery to get tubes in her ears. It was a joyous week tainted by sickness and hospitals. BUT all in all, she is growing big and strong. Walking, talking, eating her way into toddlerhood. I couldn't have imagine this past year any better. Peyton really is the best thing I've ever done and had in my life.

I'll try to get on and go thru her massive birthday party (yes, I went over the top) but until then I'll just leave you with the cutest photos of her EVER! 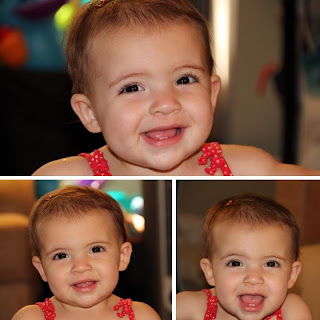 Diaper size
I are finishing up our 2's, but we purchased a huge box of 3's - cruisers. They seem to hold it all in, so we are movin' on up!

Clothing size
3-6 months in baby g.ap; 6 months in c.arter's; She still wears 3 month onesies. I started buying summer stuff and I pushed myself to buy 6-12 in g.ap and 9 months in c.arters ... She will eventually get bigger - I think.

We are on the verge of dumping pureed stuff and moving to all finger foods. We do that at home all the time, but it's easier right now at daycare to just give them a jar of e.arth's b.est and call it a day.

Sleep
Sleeps great. Bedtime slowly receded from 8 to 7:30. With summer coming, she'll be in bed before the sun goes down soon. She wakes up anywhere from 7 - 7:45am. Usually takes (2) 1.5-2 hr naps when she's home with me. It's a different story at daycare. I think she just doesn't want to miss anything (she is so my husband in that regards)

Favorite toy/entertainment
I bought her these cups that fit into each other on a whim - they were in the check out line at BRU - she LOVESSSS them. She can sit there forever playing with them.

Milestones
First top tooth – April 3
Cruising - March 25
We ask her where Ma-ma is and she turns to me and says"ma-ma" and she does the same with "da-da" - I'm not counting that as first words b/c we prompt it. She does say "Whoa" a lot and it's so cute. I'm sure it's just the sound she likes making, but still, so cute.
Starting pushing her "walker" around - she walks all over now.
She still can't stand by herself or no sign of taking unassisted steps yet. 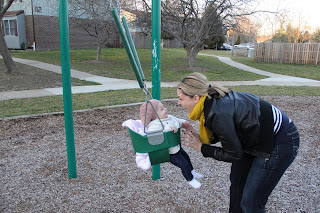 She loves the swing 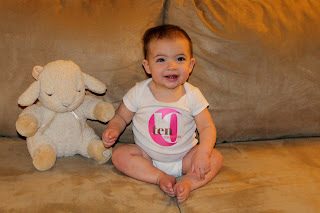 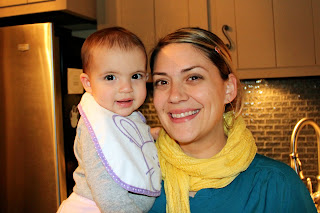 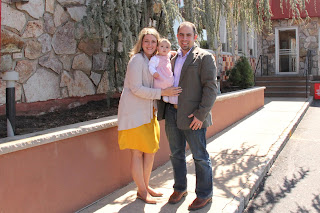 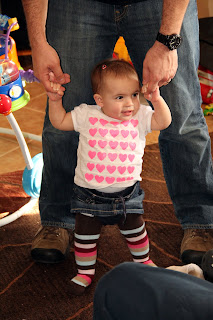 Love these tights
Posted by kayee at 3:42 PM 3 comments:

Starting a work out schedule can be daunting - especially when I want most, if not all of my non working, non sleeping time with Peyton, but nevertheless it is needed. I've worked out a hand full of times since I've had the baby but not on a consistent basis. It's prob been almost 2 yrs since I was steadily working out. I stopped right before we started ivf. That would be July 2010.
As you may have read a few posts ago (pumping 101) it is go time.
My stomach is a soft, pillow-ly cousin of its former self; my arms continue to wave after I've said my goodbyes (no thanks to my super light baby - she's not even heavier than my dumbbells!); and my ass has become very helpful in transforming itself into a shelf I can place things on. needless to say I have to start working out. I convinced C to purchase us a treadmill in the promise that I will get on that thing multiple times a week. The new machine and I have only met twice since its move in about two wks ago. I need some motivation. You would think the fact that I'm carrying a muffin around my waist would do it - but ah nope.
So I decided to register for a race. A simple 5k. In 3 mons. Enough time to be realistic but not too much time that I can put off starting. So with that being said I will starting my training program tomorrow morning - 6am. I am making my friends here hold me accountable. Ask me how it's going. Ask me when I ran last. I need some pushers! I will - gulp - post a "before" post and ?!?!! Photo ?!?! this week. Yikes!
Posted by kayee at 10:52 PM 1 comment:

Diaper size
2’s still. I think we will be here for a little bit more.

We started giving her a lot more fingers foods. She LOVES pieces of chicken. And I think she is a huge carb fan – puffs, bread, graham crackers, pasta … I also started mashing up veggies and fruits. Soon enough we will dump the pureed stuff and go straight with whatever we are eating.

Sleep
Normally sleeps through the night and I’ve noticed that she is waking up earlier than usual, but just sitting there talking to herself. She seems fine just entertaining herself.

Favorite toy/entertainment
She loves the remote control – I gave her an old one, so she has her own now. She loves ripping magazines and playing with anything that is not really a toy – phones, shoes, paper, pens, etc.

Milestones
Second tooth – March 2
Full on crawling – early Feb
Getting into a sitting position by herself – mid Feb
Pulling to a stand – Feb 26 (she has taken a few steps around the coffee table to get to some toys)
Starting to “wave” hi and bye – Mar 1
(last week was a big week for her!) 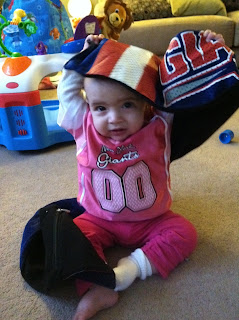 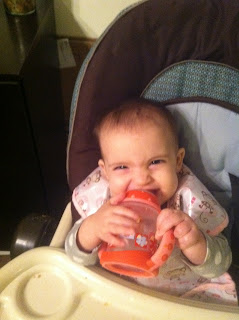 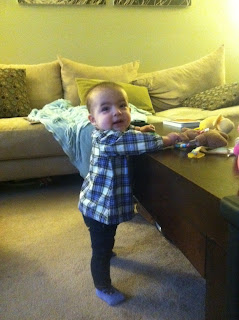 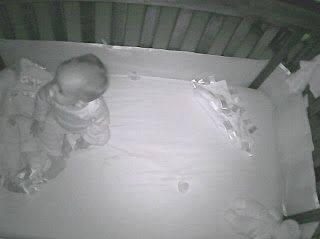 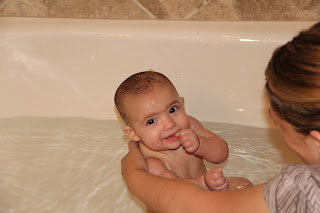 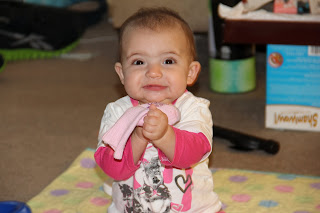 Diaper size
2's - she has the cutest tush

Feeding Schedule
8 am - 7oz formula
10am - 2oz oatmeal, 2oz fruit, some water
12pm - 7oz
4pm - 7oz
6pm - 2 oz "dinner" (chicken mixed with veggies); 2oz veggies, some water
Tomorrow we are starting a third solid feeding at 2pm.
Sleep
Still sleeping thru the night. She has been getting up at night due to teething or something. I've been seeing a lot of 4ams lately.

Favorite toy/entertainment
She loves her Dance Wiggle dog - I don't know what the real name is, but you know what I'm talking about. She loves ABC blocks and my iTouch with Laugh and Learn apps.

None more deserving than she

In this trying world of IF, you “meet” lots of different people. You feel a connection with other women going through the same or similar thing. In my case it was because no one in my real life understood; I needed to feel like I wasn’t alone. You join message boards and start blogs sharing your most intimate, deepest feelings/secrets/moments with, essentially complete strangers. You don’t think that these “web-friendships” will ever turn into anything more. Except I couldn’t have been more wrong. I found a connection with a bunch of ladies and I have a feeling we will always keep in touch – but there is one woman that I felt like I knew (M at Seriously?!). I got her. She got me. I confided in her more than I did my closest “real” friends. We cried and laughed and we wished together for the one thing we were both missing – a family. I swear the only reason we have never met is because we live on opposite sides of the country, her in fact, in another country! But we talked and daydreamed about our meeting and all the fun we would have.

When my dream of wanting a baby started to become a reality, she was nothing but a solid cheerleader for me. Sending me well wishes along the way. Calming my fears. All while struggling still with the beast of IF. She has been dealt a difficult hand and I don’t think there is ANYONE more deserving of a family – she is loving, funny, motherly and kind.

Well a few days ago, after many years of trying, waiting and agonizing, her wish finally came true. Her daughter was born. I can’t even describe how happy I am for her. Words seem so little in comparison of how I feel. I wish I could jump on a plane and head over there just to give her the biggest hug ever. She is going to be a fantastic mother.

I know you are holding your breath, waiting anxiously for the weeks to pass before there is no turning back, but I know that this little one will forever be in your arms.

So here is to you my friend, M – Enjoy! Enjoy it all. The tiny toes, the softest skin and the heart that has stolen yours. xoxo

kayee
I am in my early 30's and have been married to my wonderful husband, C since Oct. 2006. after many years of infertility, i finally got pg on my first ivf and had a beautiful baby girl in june 2011.